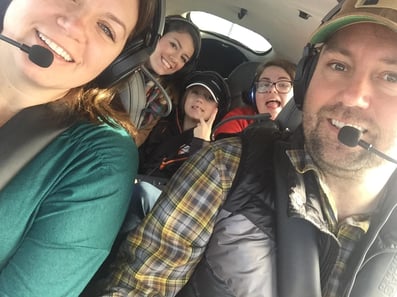 As amazing as flying is, I’m not going to lie, it makes me nervous. I have a very controlling personality so it’s very hard for me to sit in the plane and have absolutely no idea what any of the buttons or gauges mean. Everytime I get into a plane, I am the person sitting in the passenger seat hoping that the person to my left is prepared and will be able to handle it if something does go wrong. Now that I have spent some time around Sparkchasers, I realize that airplanes are actually better maintained than the car that I drive everyday.  There are so many regulations about maintenance and those that do work on aircraft and my dad is an excellent pilot, very smart, always careful and excellent under pressure. But sometimes, knowing all that goes right out the window …. Like over Memorial Day weekend - my family was flying to Arkansas; which we have done a couple of times before, so I wasn’t too worried about it. On this trip we actually didn’t have enough headsets in the plane, so I decided to use my own earbuds so everyone else could have a headset. We started to taxi down to runway 21 at KJNX and I noticed, what I thought was condensation, coming off of the wing, but I shrugged it off and turned on my music. When we had been flying about 15 minutes, we all began to smell fuel and I could clearly tell that something was wrong, but I couldn’t hear what everyone was saying and I couldn’t talk to them because I didn’t have a headset. My sister typed in the notes on her phone to tell me that we were leaking fuel and were going to have to make an emergency landing at what turned out to be Siler City, NC (KSCR). This had never happened before and being someone who doesn’t know aviation that well, the words “emergency landing” sent me into a small, but very real panic.

I hear customers all the time telling their aviation adventure stories in the lobby of Sparkchasers and now I was right in the middle of my own “adventure” -Have we not all been there? I’m talking to you, person in the passenger seat. Haven’t you felt that panic before? That moment when you hear something beeping and you don’t know what it is or what it means and it sends your stomach into knots.  In our situation over Memorial Day, everything turned out fine - we had to return to KJNX because of the fuel leak, but we were all safe and the plane was fine, so that’s the best outcome. I wonder if, with time and experience, it will get better, or if there will always be that little bit of angst whenever I get into a GA plane. I guess time will tell if my first emergency landing was a confidence building experience for me or created more anxiety around flying, but for now, as a passenger, I wanted to let all the passengers know that there is someone at Sparkchasers that may be just like you. I would love to hear your thoughts and experiences so please share! Fly Safe Aviators and Passengers!