The Infamous Question.. Garmin or Avidyne? 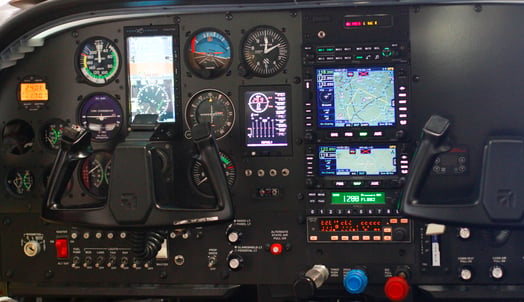 In my last blog I wanted to deal with the #1 question being posed by customers walking into part 145 repair stations these days…..ADS-B.  In this blog, I decided to tackle what is probably the #2 question asked by customers...should I go with Avidyne or Garmin?  Everyone likes an easy answer, but I hate to tell everyone that it’s just not that easy if you want the objective truth.

The simple answer to this question is that you can’t go wrong with either product in my mind.  Both of these companies have been around for a really long time and both have a full range of products in their portfolios.  If you purchase a new part 23 general aviation aircraft it will likely come with a full Garmin suite of avionics, but if you have an older aircraft in need of some upgrades you can’t go wrong with either product line.

That being said, many people that I meet are either in one camp or the other.  I have personally flown both, and would take either over a six-pack of instruments and a low IFR sectional chart but every industry seems to have a group of product snobs.  If you’ve experienced both products and are open minded enough to see the value in both products, then a purchase decision for you would likely depend on the timing of new products being released and promotions that the manufacturers have at the given time.

I mentioned the timing of new products being released because the GA sector of the avionics industry is like many other technology industries.  Anytime you have two formidable competitors in a market, they tend to flip flop each other for the best technology and feature set.  Just look at Samsung and Apple in the mobile device space as a reference.  Apple releases something and is the feature set leader for a while until Samsung releases their new product which will “one up” Apple and they have features that everyone will ooh and aah over for a while.

The avionics is no different in my opinion.  If you look at the Garmin GTN 750 and the Avidyne IFD550 you will probably notice that the one that was released more recently looks to have an advantage in the feature set category.  The recently released IFD550 has featured touchscreen or soft key controls, dynamic synthetic vision, attitude reference system, built-in USB charging port, and built-in wireless that are currently not available or have been added onto the GTN 750.  Today Avidyne has the flashy box, but I am sure Garmin is cooking up something new in the lab to show off.  Competition is good because it forces the competitors to continually improve or be eaten alive.  Right now the competition by these two manufacturers is good and that’s why I don’t think aircraft owners can go wrong by purchasing either product.

You may have a preference for one manufacturer over the other, but any reasonable man would recognize the quality of either product if they flew the GTN 750 or IFD550 coupled with a good autopilot through the soup on an IFR approach.  I’d love to hear your thoughts on this blog or on either of these products.